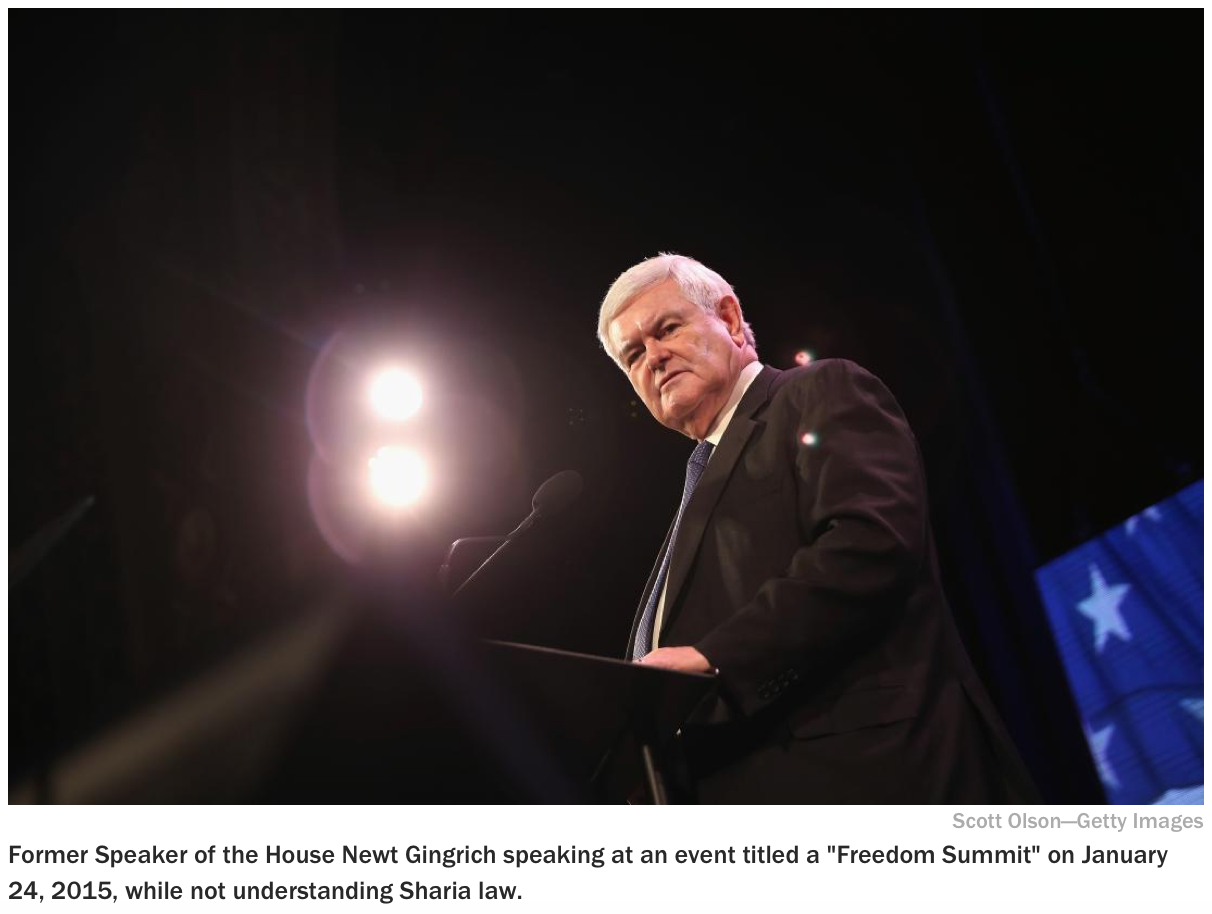 Sharia Is Nothing to Fear

Despite what Newt Gingrich and extremists alike tell you “Western civilization is in a war,” former Republican presidential candidate (and now former Trump-VP hopeful) Newt Gingrich said during a live FOX News interview with Sean Hannity, hours after a man drove a truck into a crowd in Nice, France, and killed 84, while injuring 202. “We should frankly test every person here who is of a Muslim background, and if they believe in Sharia, they should be deported. Sharia is incompatible with Western civilization.”

Please tell us how you really feel, Newt.

This is not the first time that Newt Gingrich has proven that he knows nothing about Islam and our United States Constitution. During his short-lived 2012 presidential campaign, he once called Sharia a “mortal threat to the survival of free­dom in the United States” and also boldly declared his opposition “to any efforts to impose Sharia in the United States,” as if falafel-eating bearded mullahs were already gathering ominously on the steps of the U.S. Capitol.

“We should have a federal law that says under no circumstances in any jurisdiction in the United States will Sharia [law] be used in any court to apply to any judgment made about American law,” he proclaimed during his unsuccessful 2012 presidential bid as well.

Even more strangely, when in 2010 Gingrich also attacked liberal Supreme Court justices by bizarrely claiming that “we should make clear to Justice [Stephen] Breyer and Justice [Elena] Kagan, who both seem confused on this topic, that no judge will remain in office who tries to use Sharia law to interpret the American Constitution.”

Mr. Gingrich has clearly never read the “supremacy clause” of the U.S. Constitution (Article VI, Clause 2), which states quite clearly that the “Constitution and the laws of the United States… shall be the supreme law of the land” and that no other law (either foreign or domestic) can trump it. Nope, not even Sharia.

Just like past generations of right-wing xenophobic fear-mongers who tried to paint Jewish law (known as Halacha in Hebrew) in a sinister light; these modern-day peddlers of hate like Newt Gingrich are attempting to do the same with Muslims today. They are simply exploiting most Americans’ ignorance about Islam as well as the public’s limited understanding of the country’s constitutional laws and guiding democratic principles.

“In fact, for most of its history, Islamic law offered the most liberal and humane legal principles available anywhere in the world,” Harvard Law Professor Noah Feldman once proclaimed in a New York Times Magazine article on the anti-sharia hysteria sweeping across the Republican party today. “The suggestion that Sharia threatens American security is disturbingly reminiscent of the accusation, in nineteenth-century Europe, that Jewish religious law was seditious.” Yale University Professor Eliyahu Stern further highlighted in his own opinion piece for The New York Times bluntly titled “Don’t Fear Islamic Law in America.”

First of all, any mainstream Islamic religious scholar will tell you that there is no sin­gle monolithic definition of Sharia as it exists today any­where in the world. Very generally speaking, the concept of Sharia has come to be defined as “the ideal law of God according to Islamic tradition,” according to Professor Intisar Rabb, director of the Islamic Legal Studies Program at Harvard Law School. But as Professor Rabb has also made clear: “Sharia has tremendous diversity… It is not a monolithic doctrine of violence, as has been character­ized in the recently introduced [anti-Sharia] bills that would criminalize [basic Islamic] practices” like charity-giving and other benign legal matters like divorce and estate planning. Professor Rabb has also noted that Sharia “historically was a broad system that encompassed ritual laws, so in some ways it recalls Jewish law that has rules for how to pray, how to make ablution before prayers” as well as dietary rules involving kosher (or halal) food.

“Some of the biggest misconceptions about Islamic law are that it proposes a scheme of global domination,” Imam Zaid Shakir, a cofounder of Zaytuna College in Berkeley, California—the first Muslim liberal arts college in America—explained during an interview for my latest book. He also pointed out that many Westerners mistakenly believe that Islamic law is not amenable to change in the face of changing circumstances, that it is a system that oppresses women and that by definition it is an enemy of western civilization. In fact, he stated that Islamic law actually categorically forbids many of the practices that the average person fearfully associates with some Muslims today, like killing innocent people (non-Muslims and Muslims alike) and stoning women.

“For example, Sharia forbids members of a Muslim minority [in Western societies] from engaging in clandestine acts of violence and paramilitary organiz­ing… or from acting as political or military agents for a Muslim-majority country,” he told me. “Islamic law also forbids the disruption of public safety.” (Terrorism would fall into that category.) All this would certainly come as a surprise to the many people who know little about Islam—whether they are extrem­ists who claim to be devout Muslims or those who seek to politically exploit anti-Muslim fear like Mr. Gingrich and his sinister ilk.

So since Newt Gingrich clearly does not even understand basic American constitutional principles like freedom of religion, the supremacy clause or the First Amendment—nor the tenets of the world’s second-largest religion—instead of considering future presidential runs, he should probably just retroactively fail his ninth-grade civics class instead.

Arsalan Iftikhar is an international human rights lawyer, global media commentator and author of Scapegoats: How Islamophobia Helps Our Enemies & Threatens Our Freedoms.